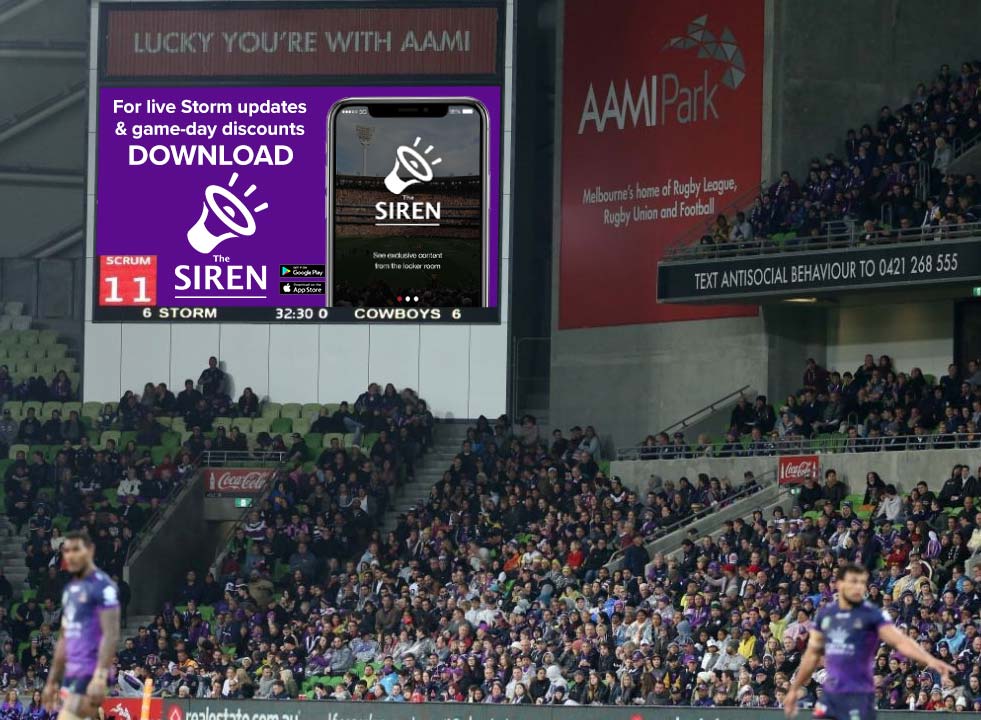 With the major football codes in Australia grappling with getting fans to live games and boosting their average attendances, the problem has reverted to the advanced viewer experience at home leaving the live experience playing catch up.

What can be done to make the live fan experience pleasurable is still being resolved with access to stadiums, parking, technological capabilities and price of attendance all considered unresolved issues.

To be launched in 2018, game day app The Siren aims to build an immersive game day experience for sports fans by utilising geofencing to offer fans content, promotions, game analysis and data to get them inside stadiums.

On the club side, it aims to help them generate new revenue through better fan targeting, live content and sponsorship.

Bullpen talked to the creator of The Siren and former head of digital for Queensland Rugby League Jason Davis.

BP: What issues did you identify with the game day experience? What needed to be enhanced?

JD: “It was a bit of a lightbulb moment for me. At the start of the 2017 NRL Finals series this year, the Brisbane Broncos were playing at Suncorp Stadium and a Broncos player was injured and taken off on a stretcher. Inside the stadium, you get a PA announcement about the injury and that’s the last you see or hear of it.

“While on the broadcast, within reason, you’d get more updates, an update from a sideline reporter, you would potentially get video of someone assessing that injury.”

BP: The things that add to the narrative and a more immersive viewer experience.

JD: “At the stadium where the hardcore fans have paid money to be there, they’re getting less.” 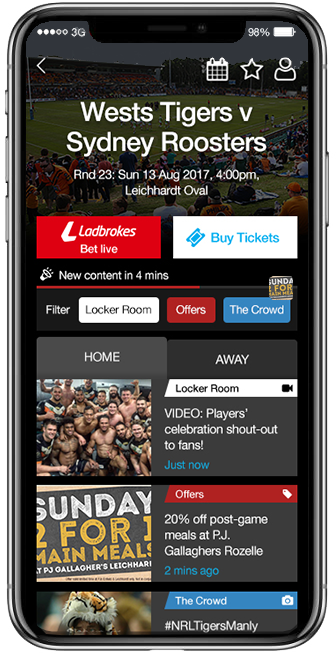 BP: It’s not just added content to improve the fan experience it’s the whole day, food and drink, atmosphere, easy patronage, are these the aspects of an in-stadium fan experience that you’d hope The Siren improves?

JD: “We’re trying to solve as many pain points in the live sporting experience as we can. For example, especially at bigger stadiums, if you haven’t pre-purchased tickets and don’t want to stand in line for them you’ll be able to buy tickets through The Siren because it’s a geolocation based app.

“If you wish to have a bet you’ll be able to tap a button and sign in to your betting account and see what markets are available for that match.

BP: What potential power do you want to unlock through geofencing?

JD: “Any team that’s selling tickets to their matches through a ticket provider can get a list of everyone who has bought a ticket, but then it’s a bit of a pain for them to import that into their CRM and match it against their database of members.

“The data a team is after is a list of everyone who has attended that is not a member and what they want to do is try and convert them to becoming a member.

“With the app, it’s a lot easier to do that. You can get a Facebook custom audience of everyone who has signed into Facebook and opted into the app in the stadium to get a refined view of those people who attend matches.”

BP: With the development of the app can you take me through the app’s testing process. How long has it been in development for?

JD: “In terms of physical development, it’s only been in development for about two months and we’re due to have our first beta test shortly.

“It’s been a fast development process probably because the app is reasonably simple.”

BP: While the app development itself has been relatively quick, what was the genesis of the idea. What made you pursue it?

JD: “I spent the last two and a half years in rugby league heading up the QRL digital team looking after the QRL, Queensland Maroons and Intrust Super Cup second-tier rugby league competition in Queensland and Papua New Guinea.

“Before that I was at Channel Seven undertaking various projects such as the Australian Open.

“Over the last five years, the broadcast sporting experience has been enhanced with lots of features and value-added stuff for the fan whereas the in-stadium live experience hasn’t as much.”

BP: From your point of view could this platform be a difficult thing to integrate for NRL clubs considering some of their digital media teams might be a little stretched on game day? It means doing unique content to push out on to another platform on game day.

JD: “We’re trying to incentivise teams to put resource towards that.

“There’s two parts to my answer: one is it’s all going to be phone based so they’ll be able to shoot video via the app and then push it out. People who are logged on to The Siren in the stadium, as long as they opt to get notifications, will get notified as soon as there’s new content.

“The second part is, it’s free for teams to use and they’ll get free digital inventory that can be leveraged which hopefully adds an extra incentive for them to participate.”

BP: Wests Tigers Chair Marina Go is on The Siren team, has a number of NRL stakeholders driven the need for an engagement app that does utilise geofencing?

JD: “I think it’s a well-known problem, and even though it’s not specific to the NRL, the NRL knows it needs to solve this problem. All clubs always want to sell out their games, have more engaged fans but also would like to have more data on them as well.” 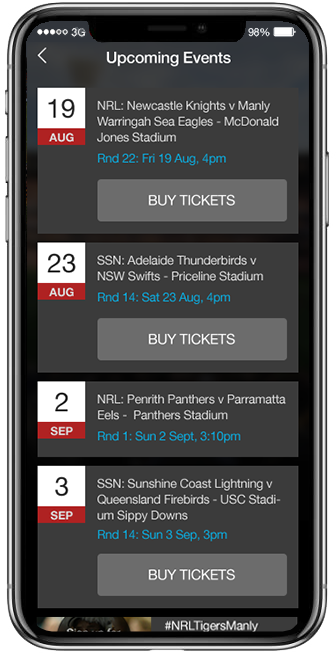 BP: As someone that’s worked with elite organisations, you currently run a content agency, I want to get your thoughts on where does the future lie for game day sponsorship activations for brands?

JD: “There’s only so much stadium signage you can sell, and that’s fine. But where a sponsor really wants to be is on fans phones, on that premium real estate that lives with them 24/7 sending push notifications.

“Clubs will be able to use their own content spots and also integrate advertisements effectively by pushing sponsor and partner offers to the people in and around the stadium. From there, that can be enhanced with an on-site activation inside and out of the stadium. You can even push competitions or videos of particular brand activations to everyone using The Siren as that extra brand reinforcement.”

BP: That encourages sponsorships that aren’t static and can have a lot of variety week after week.

JD: “Absolutely and then we can also obtain data that comes from it so we can see who engages with it.

“We can also develop a call to action such as, ‘check the big screen at half-time and you might be one of the lucky winners for X,’ and you can do an on-field physical activation at half-time. You’re basically joining the dots.”

BP: What are your expectations when the app goes live in February next year. Do you have any particular targets that you want to meet?

JD: “We’ll go through the testing phase and on-boarding some NRL, Super Netball, rugby union clubs and I expect other football clubs to trial it during their pre-seasons. What we’re looking for is those teams to see the value in it and continue using it all season.”

16
Tagged under: NRL, Technology, The Siren 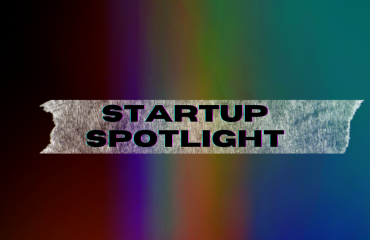 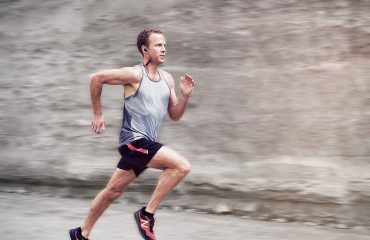 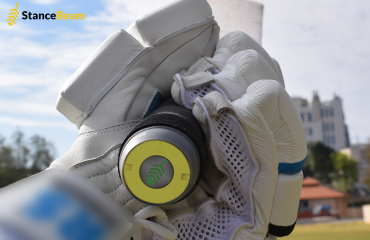 StanceBeam: The Personalised Coach at the End of Your Cricket Bat