How Big a Hit Has Sport Taken on Social Media During the April Lockdown?

How Big a Hit Has Sport Taken on Social Media During the April Lockdown? 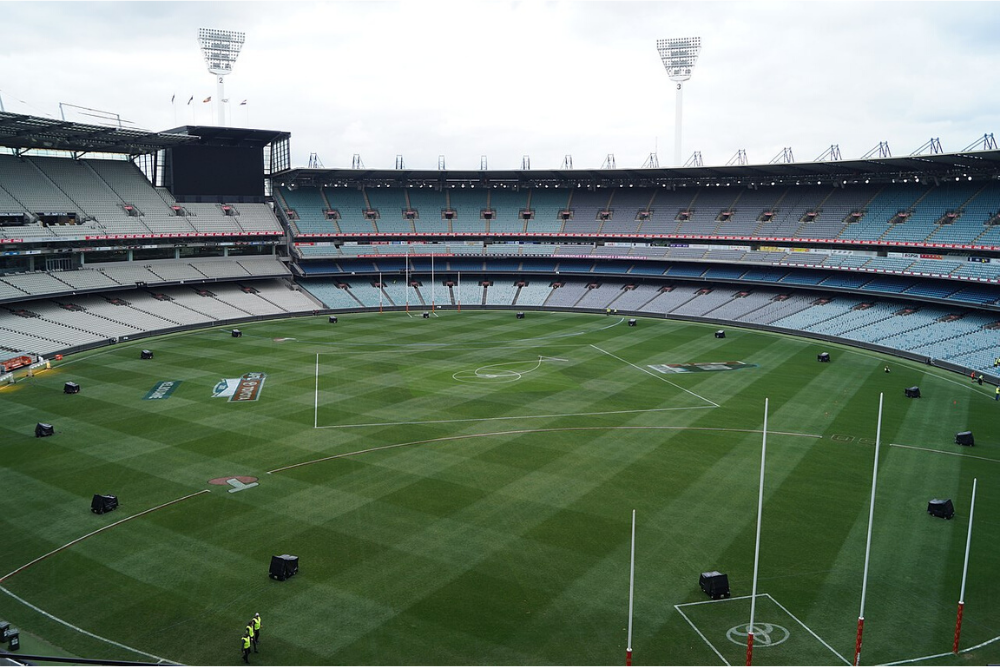 Shunt’s April activity comparison has shown that Covid-19 dragged down the Australian sports industry’s Facebook productivity and engagement by a third with better resourced national sports and teams faring best while smaller state and territory markets have suffered the most.

Shunt has taken a detailed look at how each market is coping with the enforced lockdown by comparing April 2019 results to last month on Facebook. This encompassed core productivity (post frequency), engagement (reactions, comments and shares) and performance (average reactions per post) metrics. 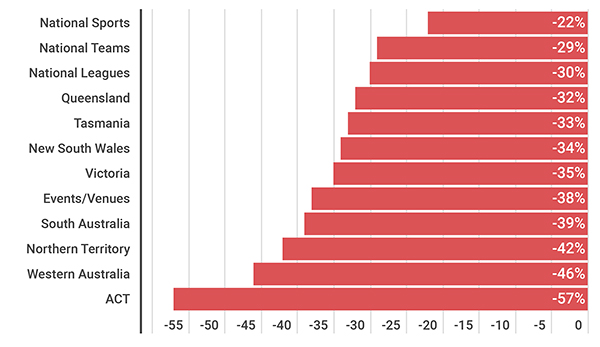 Sporting event and delivery themed content compromises the vast bulk of material published by the Australian industry via social media. Despite there being almost no activity through April the sector has done remarkably well to keep audiences engaged with the biggest, highest profile sports and leagues adapting best.

As can be seen above, national sports productivity dropped just 22% while the 150 national teams monitored by Shunt throttled their activity by 29% with the major domestic leagues one percentage point further in arrears.

Tasmanian state sporting organisations (SSO’s) did well considering they are likely to comprise some of the smallest sports administrators in the country by keeping their productivity drop-off limited to a third. Western Australian sports interestingly struggled (down -46%) while the ACT was the worst-hit (-57%). 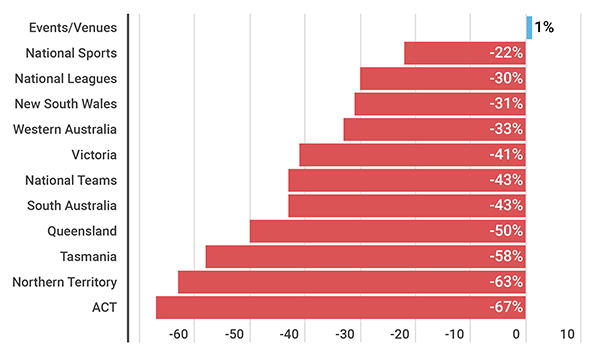 In an astonishing result, the 40 venues and 25 homegrown events monitored by Shunt recorded a positive result (albeit just 1%) for engagement on Facebook. Highlighting how much we are missing the opportunity to watch our favourite teams and athletes in action around the country.

With the national governing bodies for sport and their associated leagues holding engagement losses to 22% and 30% respectively, it’s the teams that are feeling the full-impact of not being in the public eye with a more substantial 43% dip.

Smaller states and territories were able to hold some ground when it came to productivity but have been adversely impacted for engagement with Tasmania down -58%, the Northern Territory -63% and the ACT a whopping two-thirds.

Only 163 (22%) sports administrators recorded a year-on-year improvement in their Facebook engagement with the median industry result a concerning -60%. 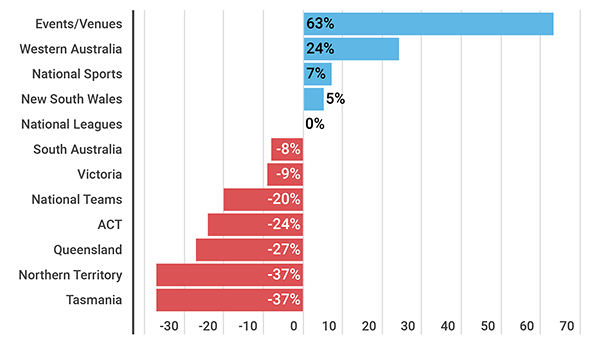 One highlight of the Australian sport’s industry social media response to the lockdown has been the post-performance ratio (average reactions per post). Here we can see that the events and venues, Western Australia, national sports and New South Wales markets all finished in positive territory with the leagues breaking-even.

Post-performance downside was limited to a maximum of -37% for the Northern Territory and Tasmania in what has been an interesting result with several possible drivers.

It could be that in switching storylines from the playing field to the home and backyard sports communications teams around the country have really stepped-up their game and are optimising the quantity vs quality trade-off.

Conversely, it could be that because we’re all stuck at home, boredom is driving-us to engage with any sports content we can get our hands-on, no matter the quality.

Another potential factor is that the highly fluid nature of the Covid-19 pandemic and subsequent lockdown has us all seeking-out any and all news related to its progress and the flow-on effect to our favourite sport or team as we all crave a return to (a likely new) normality.

As with productivity results, 27% of industry Facebook profiles performed better than April last year, with the median drop in performance at -36%. 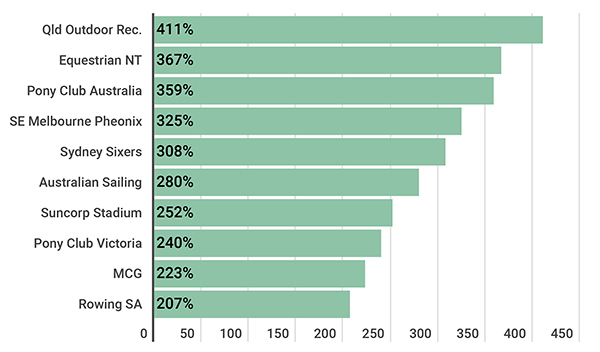 With fishing, hiking and camping some of the first activities to be given the greenlight as the Covid-19 lockdown eases it’s not surprising that the Queensland Outdoor Recreation Foundation seriously stepped-up its publishing game from 2019 to ’20.

This active recreation orientation broadly fits with four other sports organisations that made the Shunt Top 10 for most productive – Equestrian NT, Pony Club Australia, Pony Club Victoria along with Australian Sailing.

MCG result highlights how much we’re missing our sport 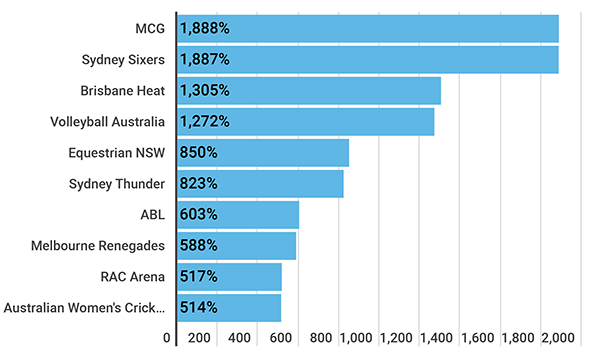 Nb. Minimum of 200 reactions, comments and shares during April 2020

The Melbourne Cricket Ground (MCG) posted a stellar April result for Facebook engagement. This time last year it mustered close to a thousand reactions, comments and shares. Fast forward to last month and that number had dramatically increased to 18,000.

In what is a normally quiet time for BBL teams and cricket in general the Sydney Sixers, Brisbane Heat, Sydney Thunder and Melbourne Renegades made the most of some relatively ‘clear-air’ to seriously engage their fans via Facebook as did the Australian women’s cricket team. 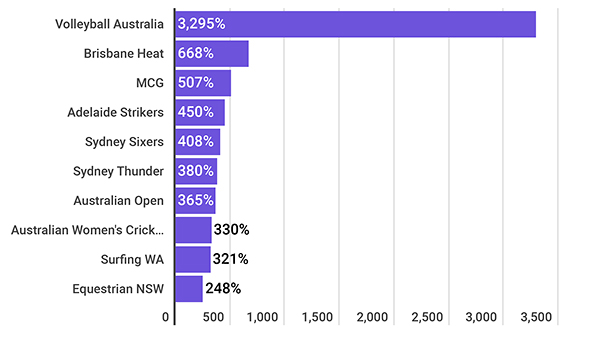 Nb. Minimum of 30 reactions per post on average during April 2020

Strong engagement results for Volleyball Australia and Equestrian NSW carried through to their performance ratio with the former advancing from 34 reactions per post in April 2019 on average to a staggering 1,150 in 2020.

Another turning in a great result was the Brisbane Heat who typically this time of year average a 1,000 reactions per post. Lockdown associated content has catapulted this figure to 9,500 on average.

As with cricket, the Australian Open tennis tournament is very much out of season with a 1,000 reactions per post also its average result for April. This climbed to 4,400 last month.

With courtesy from Shunt Creative. The original article is here. 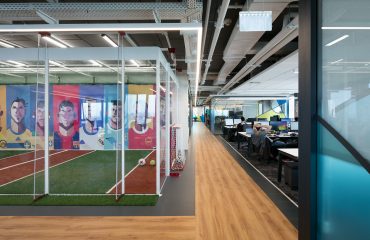 WSC Sports is Boosting Their On The Ground Presence in APAC 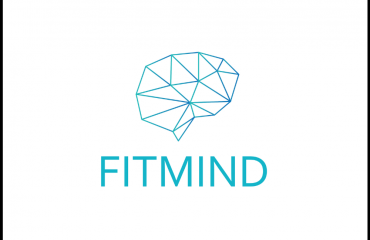 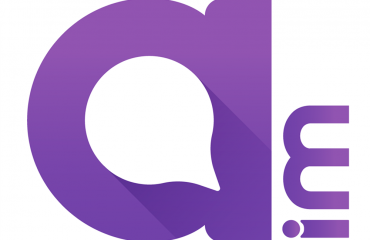 How Arena.im Brings Conversations Back to Publisher’s Native Platforms