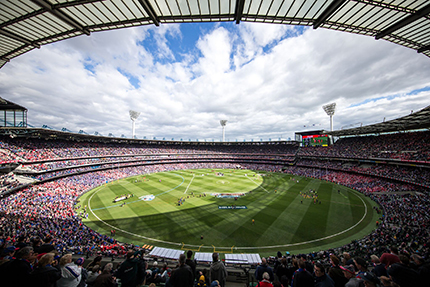 The AFL finals is upon us with four games across three of Australia’s biggest sports venues, but with only one match in Melbourne in the first week of finals fans will be out in force to the Melbourne Cricket Ground when Geelong take on Richmond.

While the on-field action and analysis will get the column inches and airtime, in the background the MCG will be trialling a new technological enhancement that aims to improve the experience of patrons by informing them where the shortest food and drink lines are.

This is due to Melbourne Cricket Club’s (MCC) recently signed partnership with Detroit-based start-up WaitTime who identified the MCG as their first international partner.

WaitTime’s technology is all encompassing, sensors are installed inside venue concourses, data is then released and interpreted using artificial intelligence to determine the length of lines. The results are shown on real-time dashboards, both on digital signs inside the venue and on a smartphone app.

The goal is to streamline queues, remove bottlenecks and get people served quicker so they can get back to the action.

The MCG’s initial WaitTime trial is limited to the ground level and basement level in the public areas of the Great Southern Stand and Olympic Stand.

It’s bold but it seems logical to run this type of trial when the stadium is at capacity and vendors are at their most high pressured. When asked why such technology will be trialled during the peak-time AFL finals, MCC CEO Stuart Fox told Bullpen. “Finals not only bring large crowds to the MCG, but often fans who are less familiar with the stadium and outlet locations. It therefore provides us with a good opportunity to trial WaitTime technology during very busy conditions, as well as get initial feedback regarding the technology’s ease of use from a variety of patrons.” 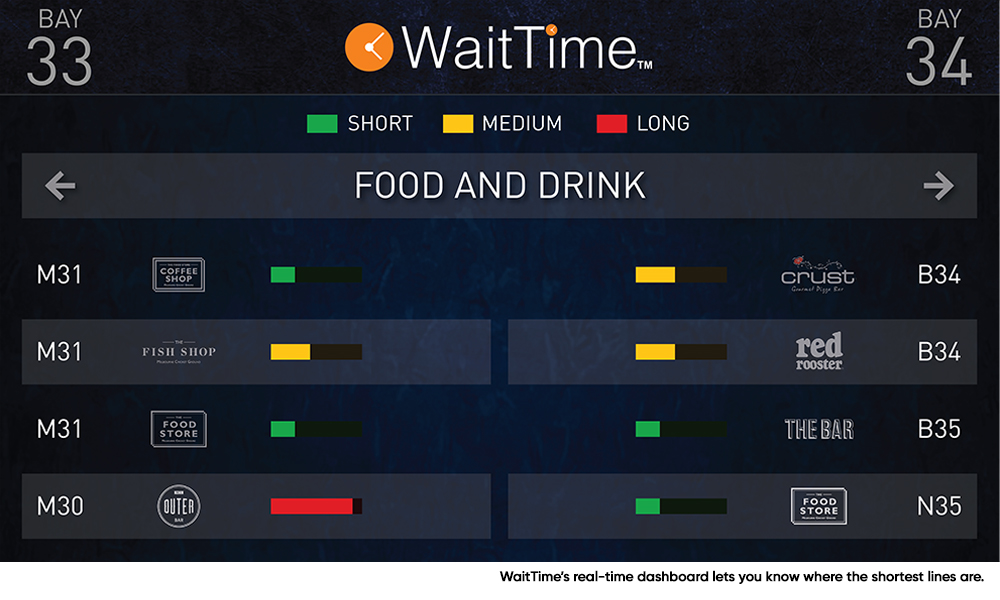 Having explored other stadiums in a recent trip to Australia, WaitTime CEO Zachary Klima explained in an emailed response why the company considered partnering with the MCG to assist with the company’s international expansion. “The MCG is one of the most elite stadiums in the Southern Hemisphere with an abundant amount of rich history. This was important for us at WaitTime because launching with the top venue in Australia was vital to our international scaling strategy. We wanted to launch with a progressive, forward thinking, ‘game changing’ venue.”

The company launched in 2014 and have steadily raised funds in that time. With partnerships with other US venue operators already signed, they are looking to massively scale operations in the US and overseas.

“We had looked at Australia a number of times due to how demanding their sports market is. We were looking for the right venue to launch with and when the MCG contacted us it was a very easy to see that they were the right fit out of the gate,” said Klima.

From the MCC’s point of view, driving this change and technological integration of WaitTime has been patron driven.

“Our patrons, and the experience that they have while at the MCG, is at the core of our decisions. Our research has shown us that wait times for food and drinks are one of the key frustrations for patrons at the MCG, and WaitTime provides a unique approach to hopefully help address this,” said Fox.

It’s a big test for WaitTime’s capabilities. With partnerships with US arenas including the NBA’s Detroit Pistons soon to be former home at the Palace of Auburn Hills, Miami Heat’s American Airlines Arena and Indiana Pacers home of Bankers Life Fieldhouse, the capacity of those arenas approaches 25,000. The learnings that the company will take from this trial will be invaluable with Kilma acknowledging that with crowds going well beyond 50,000 at the MCG it poses new challenges for his company. “We are always learning and gleaning insight off of different crowd conditions to make our solution sharper and more adaptable. We have done months of internal development to amend our software for some of the different physical environments that MCG has in their building,” he said.

Fox then added the importance of having this new data to improve fan experiences at the MCG. “We hope the technology will not only help to enlighten MCG patrons about the expected queue time, but also show and direct them to other nearby outlets that they may not have previously considered, and which may result in a quicker service experience,” he said.

Looking longer term, the improvement in service capabilities at the MCG is paramount and Fox anticipated that its operations will improve. “We hope that the data obtained from WaitTime’s unique system of artificial intelligence and sensors will help us to improve our food and beverage service at the MCG, informing the review and refinement of existing processes.” 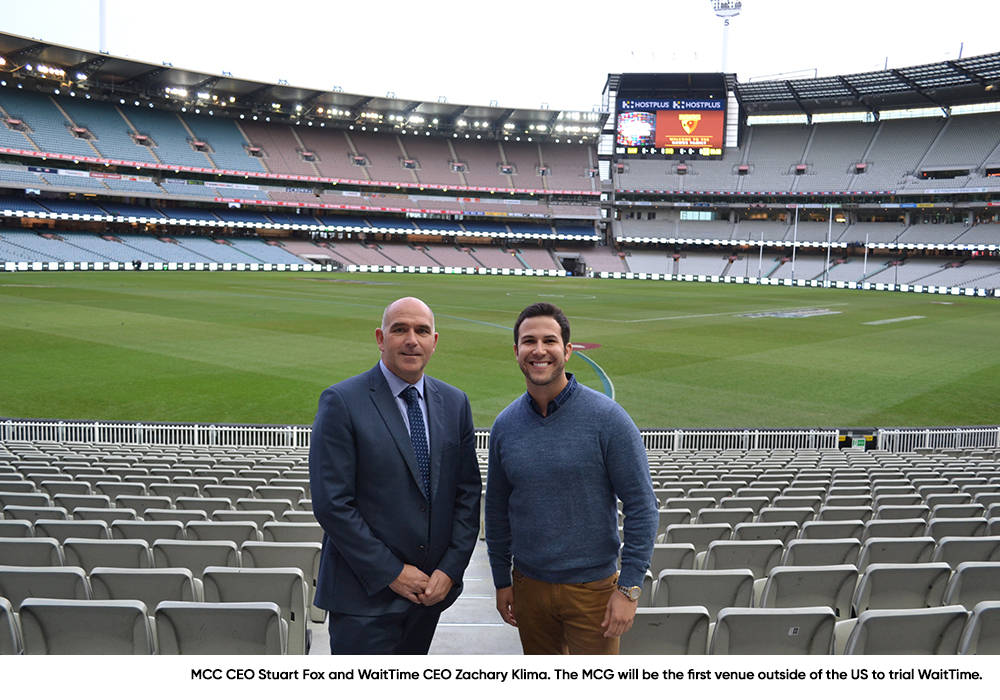 WaitTime will be also be trialled during cricket matches during the 2017-18 season, with crowds wildly oscillating during the cricket season, from a potential opening day crowd of over 90,000 for the Boxing Day Test to Big Bash League matches, it comes with different considerations concerning traffic flow and people movement. “AFL and cricket bring different fans and different patterns of behaviour when it comes to stadium movement and food and beverage purchase. It will therefore be incredibly valuable for us to see how WaitTime operates in both circumstances and help inform future decisions about potential expansion of the technology,” said Fox.

On human behaviour, considering what the technology does, Klima has foreseen WaitTime as a tool to monitor potential hazards with large crowds and crowd rushing. The technologies practical use certainly assists crowd behaviour and diagnosing human behavioural problems, extending the company’s value proposition.

“Our software specifically does this in a 100% automated fashion. We provide the partners that we work with our WaitTime tool set to see exactly what is going on in their venue. Depending on how progressive the partner is, they can do remarkable things on a proactive basis to optimise business efficiencies. WaitTime provides an unparalleled experience for your fans with our first in the world interior environment traffic system for people in real time. With WaitTime, fans know what is in your building, where it is located, and what the wait time is all in real time,” said Klima. 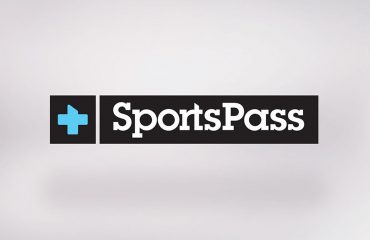 In Conversation with Chris Coleman of SportsPass 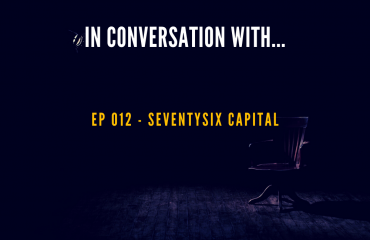 In Conversation With… – Episode 012: SeventySix Capital 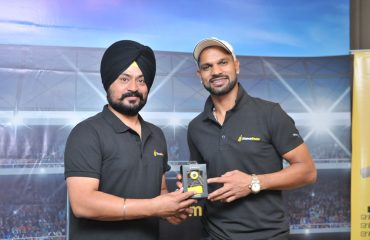 In Brief: StanceBeam Signs on Indian Cricket Star Shikhar Dhawan as an Ambassador